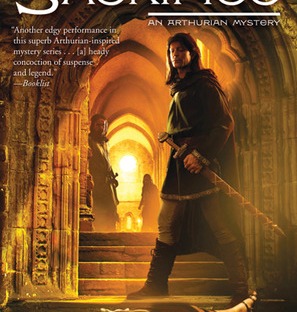 The Divine Sacrafice wasn’t a horrible read, it was enjoyable, simply not as much as I had hoped for this sequel.

After reading the first novel in the Arthurian Mysteries series, I could not wait to start the second novel in the series. I thought the adventures could only get better from here, sadly that wasn’t exactly the case. Regardless, The Divine Sacrifice can still be enjoyable on different levels as an Arthurian story, a historical fiction novel and a murder mystery, merely I suggest not setting your hopes too high up for it.

The book had a very slow start and instead of the storyline taking place in the Castellum Artorius, which is the name of the location of Arthur’s castle, the storyline was centered around Yins-witrin, the Christian community that is now known as Glastonbury.
All of the same characters were present in this second novel from the debut, as well as a few new ones; however, they all took a back seat this time to Malgwyn ap Cuneglass, Arthurs most trusted lieutenant. I would have liked to have seen more of Merlin, Arthur, and Guinevere in this novel.

The plot also had weaknesses, which I found even more frustrating. As in the last book, a suspect thought he had killed someone—and Malgwyn left him thinking he had done so—when in fact someone else came along later and killed her. This felt a little contrived the first time; the repetition struck me as lazy plotting. The ultimate resolution of the original murder was also unsatisfying, and didn’t make sense. The answers to the mysteries weren’t particularly a surprise for me, but nor was I particularly involved in them. A good historical mystery gets both the history and the mystery right.

Overall, The Divine Sacrifice had its many ups and downs and then it takes you up to that very steep incline then you plunge to your “death.” That is exactly how I would describe Tony’s second novel.

Unlike, the first novel in this series, The Killing Way, I didn’t think the twists and turns were nearly as good as the first novel. All-in-all, this was just okay in my opinion. It wasn’t an utter failure for a second novel in a series but there was a lot of room for improvement.

I received a free copy of this book in return for an honest review.

Been travelling the world for 24 out of 25 years of my life, from 6 continents to over 63 countries. 94年•JE♡NEWS♡KAT-TUN♡テゴマス♡HSJ♡i7♡TRIGGER•Traveler•Photographer•Slytherin•立命館大学同窓生•INTJ-A•Capturing the World | ENG🆗日本語🆗PL🆗SP🆗